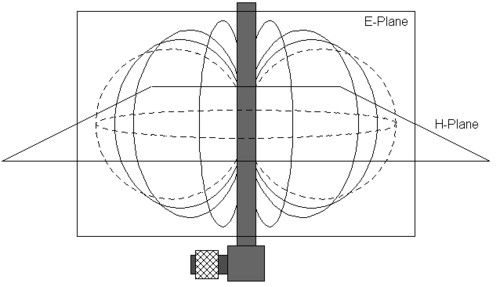 We want to thank Doug Spates and Memphremagog Rentals for hosting a node on the side of their building on Third Street. Without community support by our access point and other outdoor node hosts, the mesh couldn’t be a success. We really appreciate their help.

The new node picks up the signal from the gateway and accomplishes two tasks. It avoids what has turned out to be a high level of interference on Summer Street and helps step down the signal to street level.  You would think that being close to access point would make reception good for people right near by, but not necessarily so for those at street level because of the way a wifi signal is distributed from the antenna. The pattern looks like a donut.  Or depending on the type of antenna, a very thin bagel. Antennas create antenna gain for the router, making the signal have greater range. A short antenna adds only a small amount of range but has a pattern like a donut that’s so fat it’s almost a sphere. The longer the antenna, the greater the range, but it does it by focussing the beam so the donut gets flatter. Those “high gain” antennas you hear about may send the signal a couple miles, but they do so at the expense of a very thin vertical beamwidth. So someone standing very close underneath an antenna might get no signal at all! Our antennas have intermediate beamwidths, but reception close to the access point at street level might not be good. A step down router solves this problem. Lower level routers also avoid noise from a variety of sources that populates the higher up airwaves, as well as getting the signal under metal roofs that almost completely block  wifi. Creative siting of routers takes some work, but also makes wireless fun and interesting!